Toronto, Ontario, April 4, 2019 – Signature Resources Ltd. (TSXV: SGU, OTCQB: SGGTF) ("Signature" or the "Company") is pleased to announce that it has received additional interpretation of its airborne geophysical surveys. The data from the surveys, which have identified characteristics of the gold zones at the Lingman Lake mine, have now defined an extensive area exhibiting the same characteristics. The area is known to host over 40 mineral occurrences, reported to contain gold, copper and molybdenum mineralization. This area is situated 12.5-kilometers west of the Lingman Lake gold mine.

“These areas, far to the West of the Lingman Gold Zones, are a high priority for future exploration work. The premise that the contact zone is an extensive alteration feature along extended strike length is new for the project, but possibly explains the 40 mineral occurrences, blast trenches and historical drill holes at the West end of the property.  This historical work may have been onto something, but lacked modern airborne geophysics and inversion modelling to support the targeting.”, commented Walter Hanych, President and CEO of Signature Resources.

The feature in part, is a magnetic low encompassing 1,400-hectres within a volcanic assemblage of rocks which are typically characterized as having moderate to high magnetic intensities.  The feature is interpreted to be the result of an alteration system replacing the normal magnetite found in volcanic rocks with pyrite, an alteration often associated with gold mineralization.  (See Figure 1)

In addition, the VLF-EM 55-meter depth inversion slice defines a semi-linear resistivity low feature, within the broader magnetic low, at the edge of resistivity high, the high being interpreted to be intrusive rocks. Two linear resistivity lows, the north one, trends essentially-east-west, occurs for a strike length of 10-kilometers and is situated along the main contact between the north granitic terrane and southern volcanic assemblage, while the south one, trends northwest-southeast and extends for a distance of 4.6-kilometers. Importantly, these features reflect the geophysical fingerprint of the Lingman Lake gold zones.  (See Figure 2)

Figure 1 - An image of the Reconstructed Total Field magnetics from the airborne survey is presented below highlighting key areas.  The felsic intrusives are obvious magnetic lows, but this presentation shows distinct magnetic lows immediately South of the felsic/mafic contact, which could relate to alteration and magnetite replacement by pyrite.

Jeremy S. Brett of MPH Consulting Limited states: “The newly identified coincident magnetic and resistivity lows could match an ideal model for a large alteration system at the West end of the property and along the felsic / mafic contact.  This matches the same geophysical anomaly characteristics observed at the Lingman Gold Zone.  It potentially adds another ~14km of target zones which could be prospective for gold mineralization, which lay hidden under glacial cover."

Figure 2 - An image of the VLF-EM 55-meter depth inversion slice from the airborne survey is presented below.  The resistivity lows from the VLF inversion are correlated with the magnetic lows, mentioned above in Figure 1.  Combined, these may indicate prospective target zones along the felsic/mafic contact. 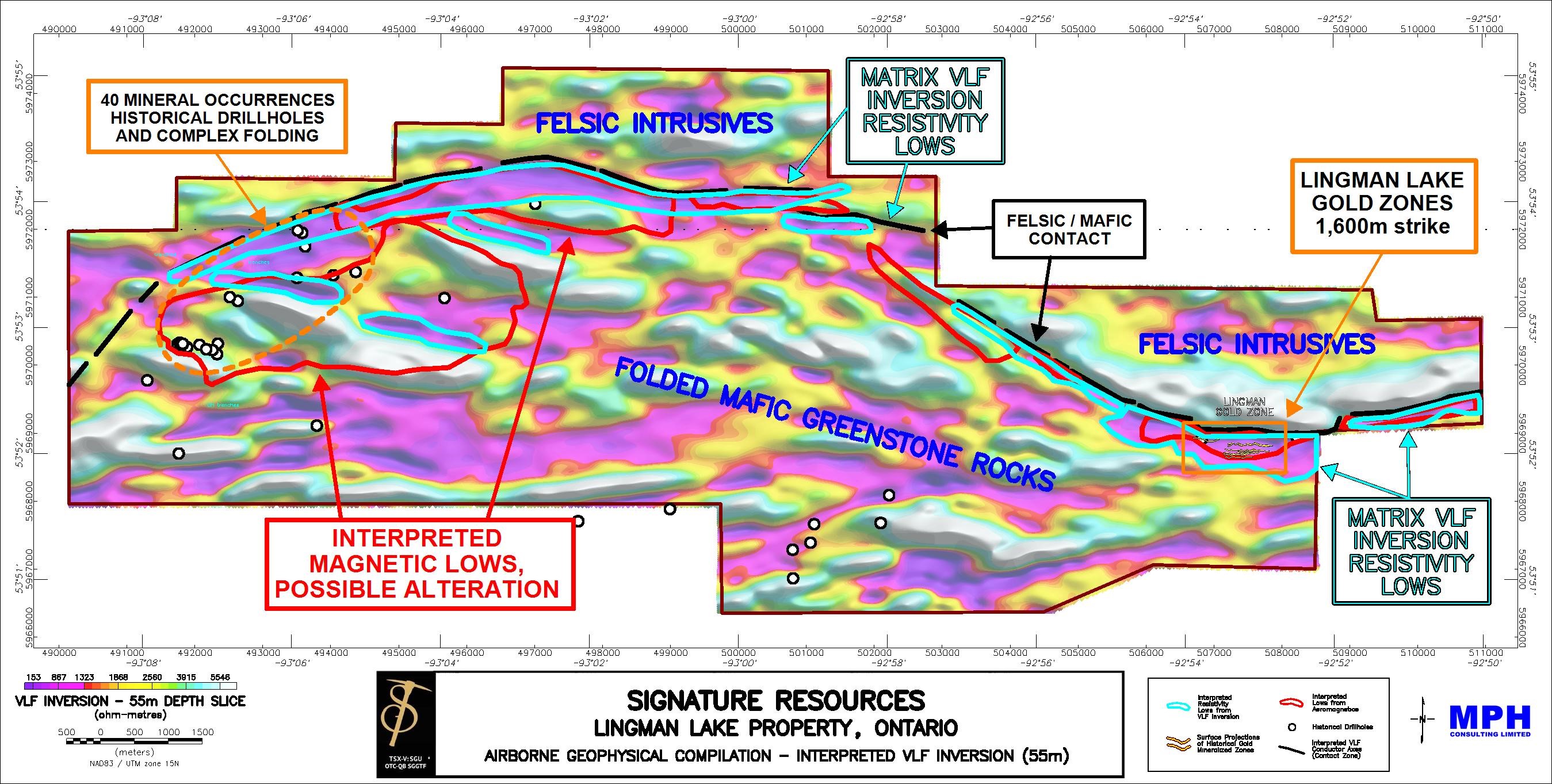 The scientific and technical content of this press release has been prepared, reviewed and approved by Jeremy S. Brett, M.Sc., P.Geo., Senior Geophysical Consultant with MPH Consulting Limited, an established international exploration and mining consulting company with its head office in Toronto, Ontario, and Walter Hanych, P.Geo., President-CEO of Signature Resources. Both are Qualified Persons as defined in National Instrument 43-101 - Standards of Disclosure for Mineral Projects.

The Lingman Lake gold property consists of 770 single cell staked claims, 4 free hold patented claims and 14 mineral rights patented claims totaling approximately 15,720 hectares. The property hosts an historic estimate of 234,684 oz of gold* (1,063,904 tonnes grading 6.86 g/t with 2.73 gpt cut-off) and includes what has historically been referred to as the Lingman Lake Gold Mine, an underground substructure consisting of a 126.5-meter shaft, and 3-levels at 46-meters, 84-meters and 122-meters depths.