Jeremy S. Brett of MPH Consulting Limited states: “Gold mineralized zones at Lingman Lake display correlation to both the Magnetic and VLF Electromagnetic components of the survey, as released May 2, 2018. A distinct pattern was identified, consisting of a Matrix VLF-EM conductor lying immediately North of a prominent Magnetic horizon.  The VLF conductor is interpreted to be indicative of fractured and faulted ground that may be related to a hydrothermal fluid alteration corridor. The VLF conductor is also coincident with weak and thin Magnetic horizons that appear to be discontinuous, possibly indicating alteration and magnetite replacement. These characteristics appear consistent with those expected for alteration system that could relate to gold mineralization.

This pattern is repeated <1km to the South of the Lingman Lake gold mineralized zones, with ~3.5 kilometer of sub-parallel strike length.  The location of this new horizon, along the North flank of a prominent Magnetic high, could indicate a repeat of the strain conditions observed for the Lingman Lake gold zones.  A possible extension of this new zone lies to the Northwest, with ~2.7 kilometer of additional strike length, and exhibits similarly coincident VLF EM and Magnetic characteristics”.

An image of the Reconstructed Total Field Magnetics from the airborne survey is presented below highlighting key areas identified: 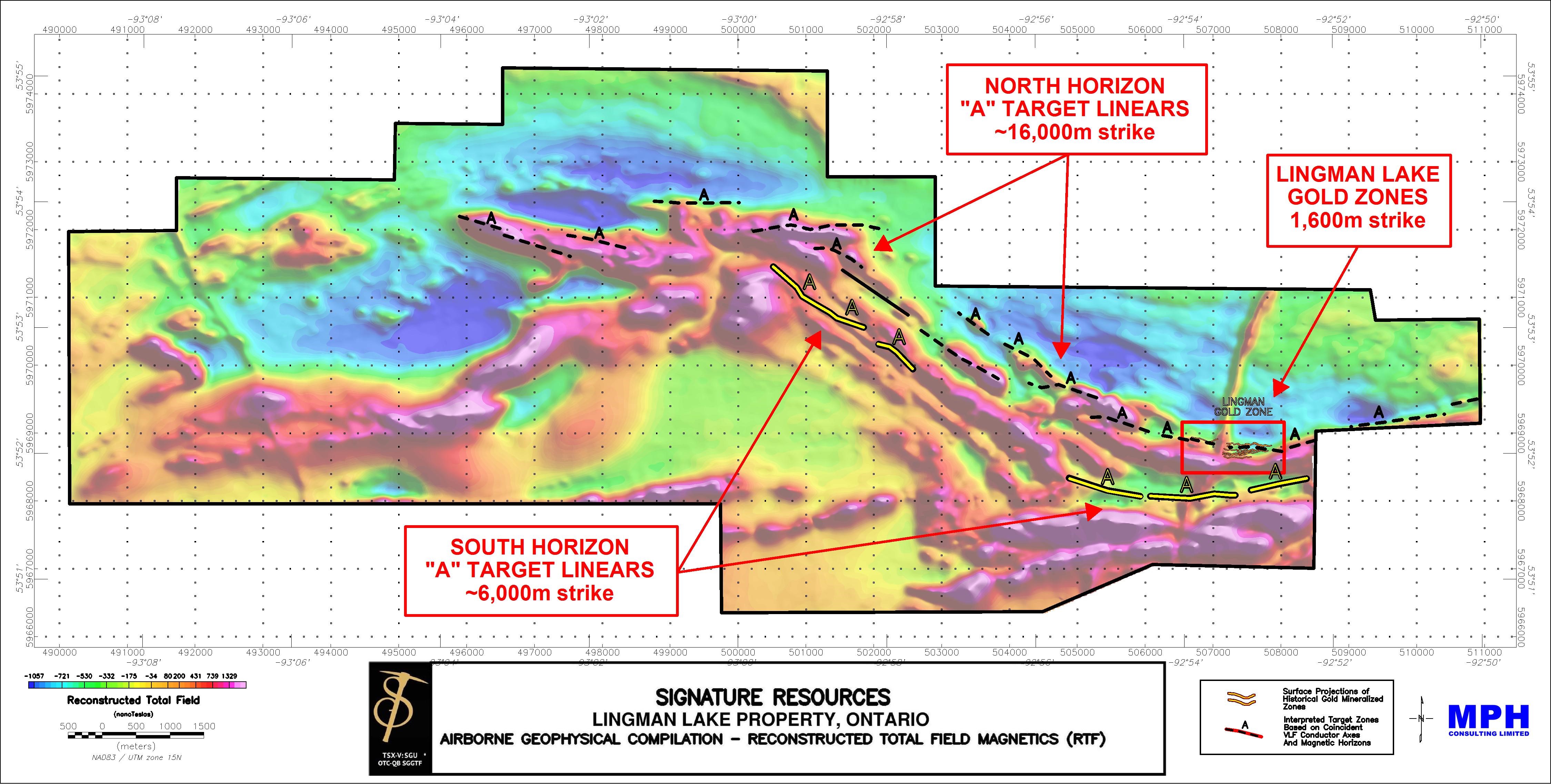 Target classification definition:  Target ranking is defined by correlation of Magnetic and VLF characteristics with the known gold zones at Lingman Lake. Hence, an ‘A’ target has the strongest correlation, followed by ‘B’ and ‘C’. We fully anticipate lower ranking targets to be identified as interpretation is on-going.

“This interpretation is very exciting. Not only do we have a new horizon defined, but it contains 6 high priority targets. In total we now have 18 high priority targets for exploration with correlations to the Lingman Lake gold zones. The survey clearly demonstrates that the structures associated with gold mineralization within the immediate mine area at Lingman Lake extend beyond current known limits. The Lingman Lake property continues to produce gold targets associated with district scale exploration projects. At such a scale, the discovery of new mineralized gold zones is enhanced, especially if you have 18 high priority targets. Furthermore, the west section of the property remains to be looked at, and we are very confident it also will produce some interesting results.”, commented Walter Hanych, President and CEO of Signature Resources.

The scientific and technical content of this press release has been prepared, reviewed and approved by Jeremy S. Brett, P.Geo., Senior Geophysical Consultant with MPH Consulting Limited, an established international exploration and mining consulting company with its head office in Toronto, Ontario, and Walter Hanych, P.Geo., President-CEO of Signature Resources. Both are Qualified Persons as defined in National Instrument 43-101 - Standards of Disclosure for Mineral Projects.

The Lingman Lake gold property consists of four free hold patented claims and 762 single cell staked claims. Total land package amounts to 15,372.3 hectares. 275.5 hectares of the property total include 14 mineral rights patents, the acquisition closing of which is pending Exchange approval. The property hosts an historical estimate of 234,684 oz of gold* (1,063,904 tonnes grading 6.86 g/t with 2.73 gpt cut-off) and includes what has historically been referred to as the Lingman Lake Gold Mine, an underground substructure consisting of a 126.5-meter shaft, and 3-levels at 46-meters, 84-meters and 122-meters depths.