Toronto, Ontario, June 11, 2018 – Signature Resources Ltd. (TSXV: SGU, OTCQB: SGGTF) ("Signature" or the "Company") is pleased to announce that it has received additional interpretation of its airborne geophysical data. Inversion of a test block of data for the Terraquest Matrix VLF system has identified Resistivity Lows that are coincident with both the Northern and Southern Target Horizons, which contain multiple high priority targets.

Jeremy S. Brett of MPH Consulting Limited states: “A test block of Matrix VLF data was inverted by EMTOMO in Portugal, with excellent results.  Known felsic intrusive rocks, lying to the north of the Lingman Lake gold mineralized zones, are clear resistivity highs.  The Lingman Lake gold mineralized zones lie within a broad Resistivity Low with a width that correlates with the rough width of known alteration, silicified zones and mineralization. The contact between the felsic intrusives and the altered and mineralized greenstone rocks is very clearly defined - this is significant because this was not easily discerned from the Aeromagnetic data. The Southern Target Horizon is also detected as a clear zone defined by a Resistivity Low.

Inversion of the Matrix VLF data for the rest of the Signature property is now planned.  The combination of this VLF Inversion method with the Aeromagnetic data has shown to be powerful over the test block. The VLF Inversion method holds great promise as a low cost Airborne Electromagnetic methods for mapping bedrock and structure in areas with shallow overburden, as exists on the Signature Resources property."

An image of the Reconstructed Total Field Magnetics with the Test Matrix VLF Inversion, from the Terraquest airborne survey, is presented below highlighting key areas identified: 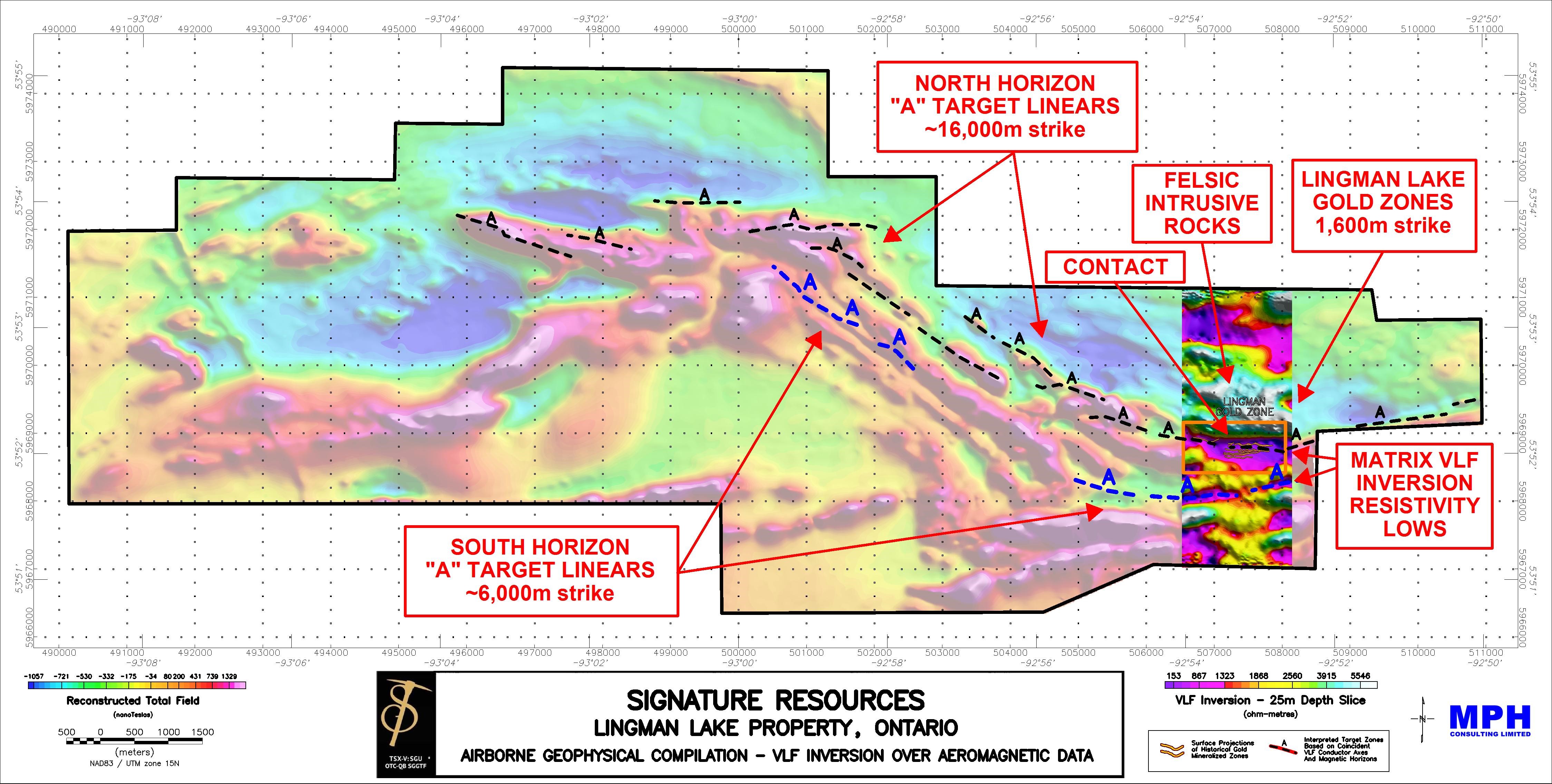 Target classification definition:  Targets ranking is defined by correlation of Magnetic and VLF characteristics with the known gold zones at Lingman Lake. Hence, an ‘A’ target has the strongest correlation, followed by ‘B’ and ‘C’. We fully anticipate lower ranking targets to be identified as interpretation is on-going.

“This is cutting edge interpretation. The inversions provide another level of focusing and defining critical horizons with correlations to known mineralizing features associated with the Lingman Lake gold zones.  The results clearly demonstrate that this is a powerful tool for gold exploration and we are very excited to be able apply it over the entire survey area. We anticipate high priority targets to emerge from the interpretations which will only enhance the district scale potential of the Lingman Lake greenstone belt”, commented Walter Hanych, President and CEO of Signature Resources.

The scientific and technical content of this press release has been prepared, reviewed and approved by Jeremy S. Brett, P.Geo., Senior Geophysical Consultant with MPH Consulting Limited, an established international exploration and mining consulting company with its head office in Toronto, Ontario, and Walter Hanych, P.Geo., President-CEO of Signature Resources. Both are Qualified Persons as defined in National Instrument 43-101 - Standards of Disclosure for Mineral Projects.

The Lingman Lake gold property consists of four free hold patented claims and 762 single cell staked claims. Total land package amounts to 15,372.3 hectares. 275.5 hectares of the property total include 14 mineral rights patents. The property hosts an historic estimate of 234,684 oz of gold* (1,063,904 tonnes grading 6.86 g/t with 2.73 gpt cut-off) and includes what has historically been referred to as the Lingman Lake Gold Mine, an underground substructure consisting of a 126.5-meter shaft, and 3-levels at 46-meters, 84-meters and 122-meters depths.